The problem of redundant oil-filled cables.

Oil filled electricity cables have been put underground since about 1960 in the U.K. These cables can prove to be a logistical and environmental problem if left in the ground still full of insulation oil after decommissioning. The insulation oil may eventually leak from the cables and enter the surrounding land and water courses due to natural stress from ground movements, failure at the joint between two cables or third party damage (excavations, civil work etc). 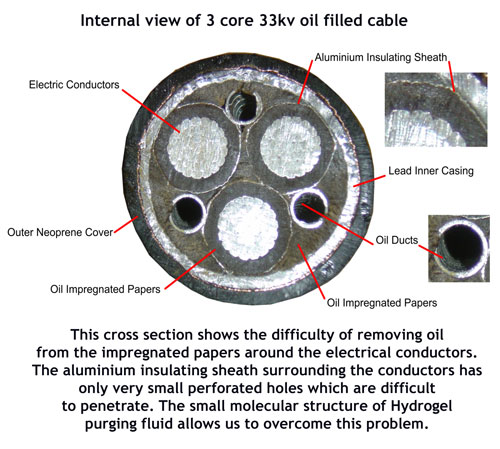 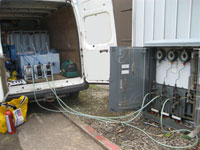 AES Cables specialise in the safe and efficient removal of the insulation oil without the need to dig up the cables for removal. The previous standard procedure has been to blow the lines with nitrogen but this only removes a small percentage of the oil, mainly from the oil duct and not from the actual insulation papers themselves, where the majority of oil is trapped. In treating redundant/de-commissioned cables, the Hydrogel purging process has proved to be far superior to the traditional nitrogen/air purging processes commonly used for this purpose, recovering in excess of 95% of the free cable oil during trials on 132kV 3 core cables.

On many occasions our Hydrogel purging system has been used to purge previously blown lines and the result has been the recovery of 3 or 4 times more oil than originally removed. This has led to our process being listed in National Grid’s PS(T)093 Cable Systems Decommissioning Policy. (see download page section 4.3)

AES Hydrogel is a newly patented cross-linked PVA molecule that has unique physical properties. It can be used to “push” all grades of petroleum based products from confined areas such as cables, pipelines and storage tanks or it can be mixed or agitated to form an emulsion which can later be easily split into separate phases for oil recovery and re-use.
The recovered oil is uncontaminated by our process and can be safely re-cycled. 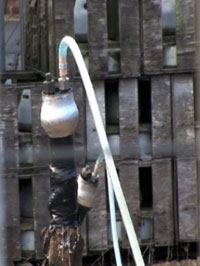 Our normal adopted method of introducing ABR Hydrocarbon Degrading Bacteria, micronutrients and oxygen release compounds in the final passes of the purging process has been proven to remove further amounts of oil trapped in the insulation papers. Should there be an existing leak in the cable system then our treatment would further stimulate any natural bacteria already existing in the surrounding external environment and help to rapidly degrade any historic cable oil that has leaked from the circuit.

The Hydrogel formulation is extremely safe. It has already been subjected to a number of safety and environmental tests:
· It is non-cytotoxic – BSEN ISO 10993-5
· It is non skin sensitising – OECD Testing of Chemicals No. 429
· It is non-irritant – BSEN ISO 10993-10
· Marine Algal Growth Inhibition Test – ISO/DS EN 10253 (resulted in a CEFAS classification of 6 which is the safest possible)

The Benefits of Hydrogel Purging

• The Hydrogel purging process requires no greater pressure within the cable than the existing pressurised and alarmed redundant circuit.

• Cost savings are achieved once the underground cable circuits have been Hydrogel purged as they no longer need to be alarmed and monitored.

• During the purging process, oil lines are quickly emptied and the hydrogel will encapsulate and draw oil away from any potential leaking section of cable or joint connection.

• The Hydrogel purging cause the least possible environmental impact during the working progress. It does not create waste streams as the cable oil is recovered uncontaminated for re-cycling and any hydrogel recovered from the circuit can also be re-cycled as well.

• Our Hydrogel purging process is suitable for fragile cables with a history of leak problems. We have experienced no adverse effects during the purging process and the displacement balance of quantified products going into the circuit (hydrogel/water/bacterial solution) and the amount of insulation oil and product being recovered has never shown any significant or noticeable losses.

• Our process involves portable equipment which avoids the need to set up permanent sites at the various work locations. This means we are able to work in locations that would normally be very problematic and cause major disruption to the traffic and the community.